​The Hunchback of Notre Dame

​ 21, 22, 25-29th January 2017
This year for our 28th Annual Pantomime we presented a new interpretation, written by member David Ayres, of the gothic Parisian tale, The Hunchback of Notre Dame. Based on the Victor Hugo novel, it recalls the story of Quasimodo and Esmerelda as they defy evil Judge Claude Frollo in pursuit of acceptance.

Who Killed the Holiday Rep?

Robin Hood
​and the Babes in the Wood

The Vicar of Dibley II
Love is in the Air

Beauty and the Beast

The Vicar of Dibley 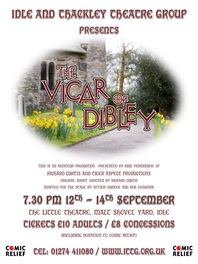 Richard Curtis' award-winning TV comedy in a hilarious new adaptation for the stage by Alyson Hunter and Bob Cochrane. When the long serving vicar of Dibley, Reverend Pottle, dies during Sunday Service, the replacement appointed by the Bishop of Wykeham, Geraldine Granger, splits local opinion. Shortly afterwards the stained glass window of St Barnabus' Church is shattered in a storm and Geraldine realises she will have to use all her charm and ingenuity to win over the eccentric locals and, with their assistance, raise the money to replace it.

Socialite and novelist Charles Condomine lives a reasonably contented life in Kent with his second wife Ruth. One evening, as research for his forthcoming book, he invites local medium and clairvoyant Madame Arcati to conduct a séance at his home with has unforeseen consequences...

A new pantomime loosely based on the classic European fairy tale, written by Idle and Thackley Theatre Group members Emma and Liam.
Directed by Richard Knowles.

Jack and the Beanstalk

The classic pantomine where Jack saves his family from being cast out from their cottage with a little help from a giant's horde, a dancing cow and a handful of beans.

A compilation of numbers from a century of musical theatre, from old favourites like Anything Goes, Oklahoma and Hello Dolly!, through Joseph and the Amazing Technicolor Dreamcoat and 42nd Street, to modern classics such as Miss Saigon, Blood Brothers and Rent.

Billy is a world famous poet, a celebrated thinker, a decorated soldier and a great lover. Unfortunately he is only any of these things in his imagination. He continually fantasizes his life away to avoid facing the more mundane truth of his life at home with his parents and grandmother, his engagement to Barbara and his job as an undertaker's clerk.

Puss in Boots is a panto with plenty of jokes, great characters and fabulous singing and dancing for the audience to join in with. Join our Dame as she struggles to pay her increasing rent, but finds happiness when her son, thanks to a talking cat, falls in love with the princess, becomes the Marquie of Carabas and gains riches beyond their wildest dreams. Laugh as the village idiot Stewart Smallpiece entertains the audience with jokes and comedy scenes with a little help from Ivana Itch and Ida Scratchett and be enthralled as the Demon Wolf is overpowered by Fairy Mary.

A lively all singing and all dancing show which puts together your favourite numbers from contemporary musical theatre with a few you may not have heard before.

It's the 80's and Shakers Cocktail Bar is the place to be after work. It’s a place where girls can meet guys, guys can meet girls, and, whether you’re celebrating or drowning your sorrows, the drink will flow. In John Godber’s sparkling comedy, four young waitresses in the bar reveal the lives of its staff and customers and offer an insight into their hopes, dreams and disappointments.

Rokella lives in Norveden at the edge of the Arctic circle. Norveden's only export is Dryvita a tasteless crisp bread made from cardboard. Rokella has a dream, to be a sh-tar but what chance does she have living in the far flung wastelands of Scandinavia?

Enter Hugh Rynal, impresario of the famous Shaft Lifters bar in the North of England. Rynal offers Rokella a chance to represent his club in this years Euro Idol Competition. She has the talent to succeed but no one counted on Das Underband the dastardly German electro nerds - hell bent on winning at all costs.

Queen of the Air
by Peter Aveyard

The story of aviatrix Amy Johnson’s struggle for equality in a man's world, and her love for her married mentor Jack.
Gallery