Extravaganza - the IT Kids Show 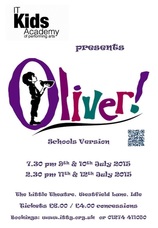 A musical adaptation for a younger cast of the Lionel Bart musical of the same name.

Young orphan Oliver Twist asks for more food from Mr Bumble and is thrown out of the workhouse onto the streets of London. There he meets the Artful Dodger and unwittingly falls in with a gang of pickpockets under the tutelage of Fagin.

Around the World in 80 Minutes 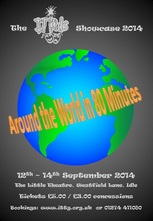 12th-14th September 2014
The Little Theatre
Travel around the world in song and dance with the IT Kids.

Read a review of this show by Judith Smith at NODA. 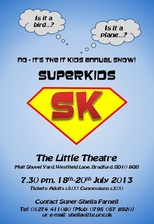 18th-20th July 2013
The Little Theatre
A show of two halves with a series of contemporary dance pieces before the interval and a compilation of favourite numbers from musical theatre (Les Miserables, Oliver, Me and My Girl, Bugsy Malone, Chicago, Hairspray and The Blues Brothers) completing a memorable evening. 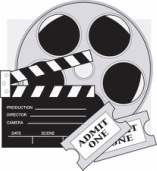 A compilation of songs, dances and scenes from the most popular films and TV shows, chosen by the Kids themselves, in a show to bring back memories of all the best Television and Film moments! A fun evening of entertainment from budding stars.

A showcase of songs, dances and drama putting the IT Kids into the Spotlight.